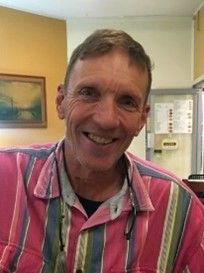 In the Engadine Bosco community more people knew of David than he possibly ever realised. Not that fame or recognition ever really mattered to him but his character, enthusiasm and achievements are widely known and well respected.

Long before his involvement in the Youth Centre, David was around to actively volunteer and assist individuals and organisations in the most humble, unselfish and generous manner with an unsurpassed ‘can-do’ attitude. In whatever community activity he got involved with he invariably found ways in which he could, and did, help using his diverse talents with energetic enthusiasm to make a difference.

As if not already busy enough with being a loving family man, traveller and adventurer he became involved in the Bosco community in a variety of ways. At first he got involved with the working-bees at Bosco Primary School. Later, between 2006 and 2011 David was involved with Football as part of their general committee. In 2011 he joined the general committee of Bosco Summer Soccer. He subsequently became the President in 2012 and held that office until early 2021.

In addition to all that, he also believed that he could contribute positively to the Youth Centre. He first held a general role in 2011 and 2012 and then vice president in 2013. In 2014 he became the 13th president of the St John Bosco Youth Centre and held that position unopposed until his untimely passing in June 2021.

David’s contribution and legacy to the Youth Centre will be primarily remembered for bringing back and unifying the ever-growing sub-clubs under the Youth Centre umbrella, many of which had become somewhat fragmented from the Youth Centre because of the increasingly difficult and demanding effort required to run sub-clubs effectively in today’s world and with the high expectations of society in general,. David will also be remembered for achieving the first critical step in the long overdue replacement of “The Hut” with the lodgement of the DA for the new St. John Bosco Sporting and Community Centre under his watch.

David’s achievements have continued the vision of the founders and their successors of the St John Bosco Youth Centre. The focus on providing sporting opportunities and facilities to the youth including, those less fortunate physically and financially, is a real testament to the spirit of Don Bosco.